Updates! Updates! Read All About 'Em!

Five sessions remain to determine the harvest price average for this year's crop (2019). This past week all commodity values have again eroded further. If the values hold and using a coverage level of 85%, a production loss on spring wheat will also have a revenue loss (drop in price exceeds the 15% deductible for 85%). Winter wheat may or may not have a revenue loss, depending upon your net bushels harvested, as the drop in price is less than the 15% coverage deductible.

Wow, one-third of the projected harvest price for the 2020 crop has been determined; except canola which was previously set and released by RMA. As indicated in last week's update, RMA had failed to included the basis ($.79)in their pricing module. The basis is recalculated each year and will be available for the 2020 crop year after September 1st.

* RMA recognizes an error in the calculation and hopes to rectify by 8/26.

Canola sales closing date (scd) falls on the weekend, so the next business day will be official scd, or September 3, 2019. As always, any and all changes to coverage level, plan of insurance and entity wanting coverage must have the required documents completed by this date.

The federal government has issued three new rules that make changes to the Act.
https://www.dtnpf.com/agriculture/web/ag/livestock/article/2019/08/19/final-rules-remove-blanket-species

Prices have continued to slide lower, for the first time in 2 years lower for all types. Some types are actually less expensive now than a year ago.
https://www.dtnpf.com/agriculture/web/ag/news/article/2019/08/21/prices-fertilizers-move-lower-first

Ultimately the opponents of Valley Oaks reached their goal...who said weren't not a litigious society. Will the opponents now hire the displaced workers or help provide for their families?
https://www.drovers.com/article/missouri-feedlot-closes-under-strain-legal-battles

The President sent a tweet on Sunday indicating a trade agreement with Japan has been reached, final signatures to be completed next month in NYC.
https://www.reuters.com/article/us-g7-summit-trump-abe-trade/trump-abe-say-u-s-and-japan-have-agreed-in-principle-on-trade-deal-idUSKCN1VF0CU

The ProFarmer 27th crop tour wrapped up on Thursday after touring 7 corn belt states, releasing their estimated yields on Friday. To the surprise of few, yield estimates are less than what USDA had provided on their release the 12th of August. For those that followed the week's daily results, the overriding theme was the lateness of the crop and an early freeze would significantly reduce the corn and bean crop. The tour estimates were made using 'best case scenario'. Many suggested the corn crop needs at least 50 days of 'good' weather to reach black layer. Ballpark, that's October 10...

Late Friday Chinese officials announced additional tariffs would be imposed on $75M worth of US goods. While increases on products such as soybeans is noteworthy, which will be 30% with the latest increase, does a higher price of products not being sold have an impact? Of note is the 10% tariff increase of west coast alfalfa hay beginning December 15, 2019. China announced earlier in August that it would curtail all purchases, so 10% greater tariff on $0 sales is negligible.

The soybean crop is 90% blooming, which compares to the normal average of 96% in bloom. Pod set is at 70%, this is behind the normal average of nearly 90% pod set for soybeans. Germany is currently the top US soybean importer; however, their hog herd is now at 20 year lows and corresponding decline in pig feed demand.

Harvest is just under 20% ytd, normal would be more than 50%. We know what our wheat markets have done, the Paris milling wheat contract is an indicator of world prices. Unfortunately this contract has had a precipitous falling of late and nothing for US markets to rally around... 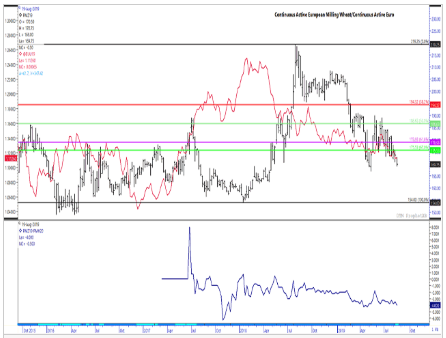 The continuous active Paris milling wheat contract, now tracking movements of the December contract, closed lower for the third straight session on Wednesday, while this weekly continuous active chart shows the potential for a fourth consecutive lower weekly close.  This move is seen despite a lower trend in the euro against the U.S. dollar (red line), reaching its weakest level in more than two years against the U.S. dollar. (DTN ProphetX Chart)

fallout from the latest round of EPA's waiver issuance and the failure to reallocate gallons...
https://poet.com/pr/oil-bailouts-force-poet-to-lower-production

Heat builds out west and below normal temps for the corn belt that desperately needs heat units. 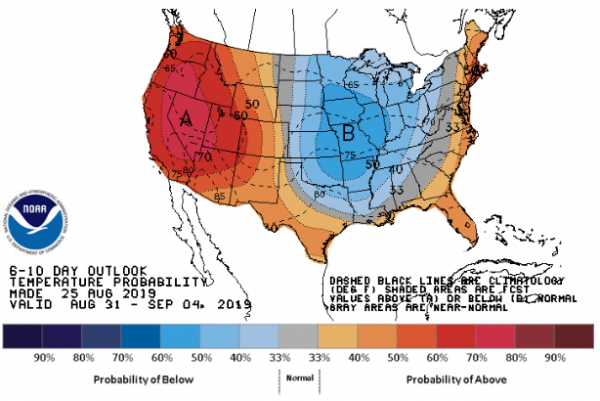 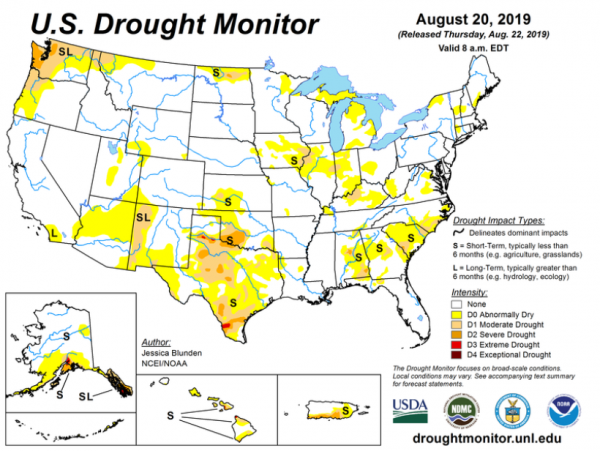 Drought strengthens in the southern plains and southeast

The troublesome OPT pack has been neutralized.
https://www.drovers.com/article/eastern-washington-wolf-pack-eliminated