There have been reports and observations of wheat seedlings having a purple tint to them that is short lived. What’s causing it?

When wheat breaks dormancy, followed by the weather turning unseasonable cold again, tissue that was a nice green could turn purple thanks to anthocyanin pigment expression. The jolt in growth followed by a sudden slow + cold temperatures may cause the upper half of the newest leaves to express the purpling as the pigment accumulates. New growth should be nice and green again as temperatures raise. Anthocyanin is the same pigment that causes red maples to have red leaves in the spring and green in the summer.

The expression is genetic and we will likely see differences by variety. In corn, plant breeders use this trait as a ‘marker’ for other non-visual traits to be able to quickly screen early generation material. Purple pigments can accumulate in mature plants as well (purple color glumes), but result from the action of different genes. No yield response work to the pigment has been done in wheat. Testing of corn plants that exhibit genetic purpling at the seedling stage has shown no evidence of adverse effects on metabolism, growth, chlorophyll production, yield or susceptibility to cold stress. The cold temperature stress which induces purpling, however, does affect early plant growth. Regardless of whether the plant is purple or green, cool temperatures slow growth.

Other causes of purpling:
Phosphorus deficiency – is characterized by an accumulation of purple pigments in the leaves. HOWEVER, purpling is in the lower leaves and sheathes and the symptom remains for weeks. Check your soil tests to insure available P. Conditions that effect P availability: cold soils and cool night temps, shallow plantings, soil compaction, herbicide overlaps or carry over. 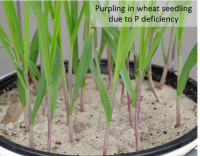