I saw my mother earlier this last week...they still love flowers! Suffice it to say, not one of us would be who and what we are had it not been for our mothers and the other prominent ladies that helped shape our lives from infancy, through adolescence, and adulthood. Thank you Mom and all the other, influential ladies too!

Just a quick update today on a couple of points...

Cyber security - We all conduct some form of business (credit card purchases from Amazon for example, or the brown Santa as the grandsons call the delivery) from home and because of our attitude that '...this type of stuff happens to others, not me,' leaves us vulnerable.

Farm Bill - The House is planning to bring the proposed new bill to the floor this week. Given the rhetoric and strong party divisions, this could prove to be an interesting and even lively debate. There are several amendments in the offering and it is unknown which will be called for consideration this week; that said, there exist several that would have a negative impact on producers crop insurance and corresponding coverage as well as cost...if not already done, it is appropriate producers and other stakeholders to begin outreach to our elected officials in the House, regarding support for crop insurance and private sector delivery and rejection of harmful amendments. 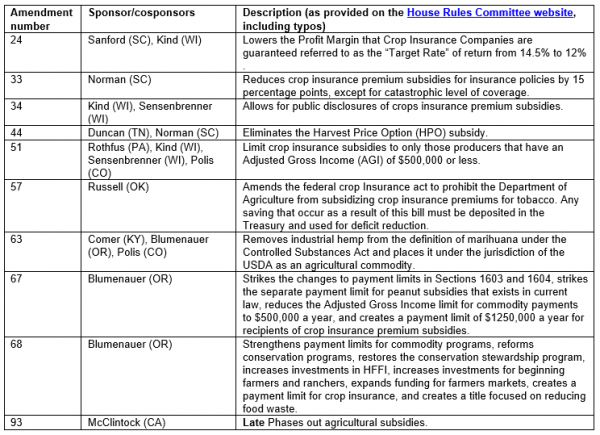 Loss of farmland - A recently released report from The American Farmland Trust (AFT) stated that the US has lost as much as 31 million acres of farmland between 1992 and 2012, with 11 million of said acres were the best, prime acres in the US. Here's the story..

Markets - WASDE released their monthly report this past Thursday. The markets shrugged the mostly neutral report to bullish for corn and soybeans, more bears for wheat, all markets lost ground for the week...I found a particularly interesting comment by the CEO of company and self-proclaimed "...developed the world's most extensive agriculture data platform," call WASDE 'outdated' and and "analogue tool for the digital age." "WASDE is a system that has not been reformed for 40 years -- in a world where data is delivered in nanoseconds the agricultural commodities sector is still reliant on data delivered monthly at best, triggering volatility throughout the global agricultural system," said Sara Menker, Gro Intelligence's CEO.

The consensus from the wheat tour that concluded a couple of weeks ago was that the crop was stressed and at least 2 weeks behind normal. The tour participants stated that the crop will need optimum growing conditions to attain the yield estimates - KS 2018 projected average yield is just under 40 bu/a, 2017 3-day estimate was 58 bu/a. That's a 30% reduction in bushels, coupled with reduced plantings initially and a high percentage of acres abandoned in OK and TX.

China, the worlds largest buyer and user of beans, has not purchased any US soybeans for over 3 weeks. West coast alfalfa exports to China for the 1st quarter of 2018 are down almost 20% vs the same time last year. Hay stocks are down significantly across Western States and the US as a whole.

More distracted driving - Twice this week, I encountered illegal activity in stop and go traffic - the benefit of a 1/2 ton and sitting higher than your typical sedan. Click this link after reading about these 2 scenes...

Prevent Planting - Just a reminder that if by chance your at planting deadline for a crop that's been part of your rotation, you must notify us immediately when you've decided your no longer going to plant the crop for harvest this year. One cannot wait until acreage reporting to advise of acres / crops that were bypassed due to an insurable cause of loss. If in doubt, give us a call...we can't assist if not made aware.

Weather - It will feel like summertime today and tomorrow, then some changes in store for our neck of the woods...

Posted in Risk Management; Posted May 15, 2018 by Curtis Evanenko