Blog » Harvest stage on the horizon

Harvest stage on the horizon

It's been several weeks since my last update and it's high time for another with several import items and reminders!

I trust this finds all well - rested from all the activities of spring work, ready for the next phase of harvest. Hard to believe that we're nearing that stage already. Talking with other growers at the recently conducted and concluded TMC research farm tours, many others feel the same way "...I can't believe harvest is just around the corner...I'm not ready yet for that!." Speaking of the TMC research tours, kudos to Cat Salois and Bruce Palmer and supporting cast members for a very informative and organized tour. Each year I think that they've attained max output and we've seen the epitome of TMC tours, only to have the bar reset a notch higher! I'm wondering what next year will bring. I realize life happens for all, yet if at all possible, plan to take a day and attend next year (June); I know you'll be glad you did!

It's been several weeks since my last update and it's high time for another with several import items and reminders...

7/1 Crop hail due date - July 1st is the cash due date for crop hail premiums in Oregon and Washington. We must have your premium monies prior to the 4th for you to be eligible for the cash discount. If you've not yet received a hail premium billing statement please let us know, as we sent out late last week. Please let us know if you need a copy of your premium billing summary.

Idaho insurance department does not allow a cash discount; correspondingly all hail premiums are due October 1st. You're welcomed to pay these premiums early, just know there's no cash discount for doing so.

Remember, man-made fire is still not a covered loss/peril under the MPCI policy. Fire coverage is very inexpensive and you can add additional dollars of fire only coverage to your existing crop hail policy at harvest, should you need additional coverage.

7/1 Acreage reporting deadline - The deadline for acreage reporting is actually 7/15; however, that's the absolute deadline and the date we must have your signature on corresponding documents. Which means, if you've not yet visited your local FSA office to certify your spring planted acres, what are you waiting for?

2018 Farm Bill - My last update was as this bill, HR2 and corresponding amendments, was about to be voted on. As we all now know, it failed to secure the necessary votes to pass; yet, 30 days later the same bill received sufficient votes to pass. There was talk that the 'Freedom Caucus' might hold the vote hostage again, yet, as it turns out, Congressman Conaway was able to muster sufficient support and votes for passage with 8 Freedom Caucus members flipping their votes. The fore mentioned Freedom Caucus did get their colleagues to bring an immigration bill to the House floor; the bill vote failed, as more than 40 Republicans joined all 190 Democrats to defeat the bill. Rubber will meet the road when both the House and Senate conference to iron out the differences between their respective bills.....stay tuned.

It is expect that the Senate will take their version of the bill to the floor sometime this week. Next week Congress is off with the 4th of July recess, and there is a sense of urgency to get this bill voted on prior to they leave DC. The Senate bill version has bilateral support as it came out of the conference committee with a 20-1 favorable vote. The lone dissenting vote was from Senator Grassley, as he wants greater restrictions on who receives benefits, in particular 'Wall Street Farmers' as he likes to classify such. There are several amendments that could be offered, that would be harmful to crop insurance; including an adjusted gross income (AGI) means test to determine producer's eligibility. I'll provide a call to action should your support be needed.

Auto insurance - I'm providing a couple of articles for your reading pleasure...

Markets - Tariffs and trade war best summarizes our current market structure and what's plagued it for the past month. When news breaks that there has been progress made, another article is quick to follow that suggests just the opposite...ying and yang I guess, or my past favorite from Mad magazine was spy vs spy. Both soybeans and pulse crops have retreated to levels that reflect imposed tariffs by China and India respectively. Does this mean that when the dust settles and agreements are in place we'll see a healthy price rally? That's certainly the hope. I've listened and read several market analysts speak to their belief that the market lows might finally be in - just this past week after heavy down day on Tuesday, corn soybeans and wheat all finished the week higher and above the lows posted earlier this week. Let's hope that's the case.

USDA will release their acreage report this coming Friday, some analysts have the opinion that there may be a surprise or two - namely fewer corn acres than the 88 million estimated in March, and perhaps more soybean acres. If this holds true, bean markets will fall hard and corn will rally. Why? Corn exports and usage are above USDA projections and carry stocks - I'm still believing that we didn't harvest a record corn crop last year, and this is a way of backing into it...yes, grassy knoll theory. Additionally, soybeans prices have fallen to levels of 2007/08 because of lack of export sales to notably China. Did you know that every 3rd row of soybeans produced in the is country is exported? When you largest buyer is boycotting, it has an immediate effect. Speaking of impact, last week China's stock market shed $515 billion in value - this amount is equal to the size of Sweden's economy...yes, the tariffs / trade issues are impacting both parties.

World wheat production is falling and being reduced worldwide. In particular the Russian wheat harvest has been reduced on several different occasions citing heat and lack of moisture in the south, while it's been cold and too wet to plant in the north. This is the first time in 6 years that the Russian wheat crop has had forecast production reduced. Australian production has been projected to be down as well due the dry conditions they're experiencing as well.

The US dollar was down this past week for the first time in a spell. Belief in the financial industry is the decline in the dollar is directly proportional to the lack of confidence in the US stock market, which was down another 400 points this past week.

Trans fat ban - Perhaps I've been under a rock for a spell, but I didn't know or realize that trans fat has been banned by the FDA this past Monday...

Weather - The forage situation in 9 of the top ten producing cow-calf states is dire due to the lack of moisture received this fall and spring. Here's a current map showing the drought magnitude in the southwestern US...a pretty short haying season for all. Something that's potentially on the horizon according to several weather gurus, is shift from neutral influence to an El Nino watch...theme has been haves and have nots, as the crop comments posted below will depict.

High heat and humidity has been the story from the Midwest past two weeks, much earlier and higher than normal, causing early stress on row crops. More heat is forecast to build in the Midwest next week as the critical pollination stage for corn begins. Here at home, we're under the influence of a cooler air pattern to begin harvest 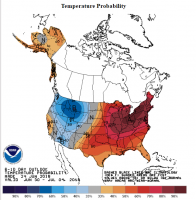 What in the world is it? If you've not already have seen photos or heard about this story regarding a 'wolf-like creature' shot and killed by a Montana rancher, here it is...the DNA results are back, I'm not sure I agree with the findings based upon the visual appearance of the animal.

Crop comments - Undoubtedly, the last photos will make the next 'Tractorstuck' video... 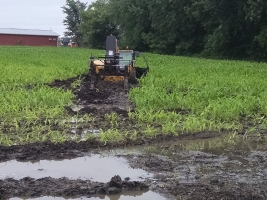 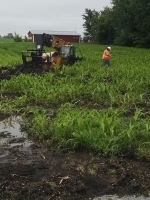 Until next time, as you embark with harvest, I wish bountiful bushels and safety.

“People only see what they are prepared to see.”
…Ralph Waldo Emerson