We're again planning to host an update seminar this fall, but make it more of a summit with additional features and speakers: from agronomic to marketing to tax planning. Stayed tuned and we'll update as those details become finalized. In the meantime, important & interesting news has been gleaned specifically for you!

Hello all,
This past weekend was Walla Walla's version of 3 on 3 basketball tournament, Peach Basket Classic celebrated it's 25th year! I helped with the 'monitoring' of games...it never ceases to amaze me how heat clouds the judgement of all involved. Parents are often the worst offenders, and they're in the shade under the tent! Players reflect their coaches and parents, good and bad...chances are, little Johnny or Jennie aren't playing beyond the high school level, yet some would have you believe the second coming of Jordan or LeBron or whomever is at hand. I'm thankful it was only in the low 90s on Sunday!

2018 Farm Bill - As expected the Senate announced their conferees last week prior to adjourning for their summer break. Nine Senators were named as conferees, 5 Republicans and 4 Democrats. Prior to recess, the Senate passed four appropriation bills bundled together for $154.2 billion for departments including Agriculture, matching funding levels of the House's version of the bill. Conferee members are expected to meet and begin the negotiation process upon their return to DC from their current break.

2018 Harvest Price Discovery - This past Wednesday was the start of the month long discovery period of many crops grown in our region. Only 3 days trading was captured, but each day was a higher close than the day prior.

Affordable Care - At a recent Farm Managers and Rural Appraisers workshop, an ag economist shared how much of an impact health insurance expenses are having on farm family cost of living, which ultimately ties to farm debt repayment. Costs have doubled for health insurance, which is not news to the readers, for many this becomes an input cost assessment for the operation...

Dos and don'ts after a wildfire - Hopefully this is not something you'll ever need nor someone close to you, mostly commonsense reminders....

Endangered Species Act - There has been discussion, interest and now movement in the past couple of years to 'update' the Endangered Species Act. Senator Barrasso (WY) has released ESA amendments of 2018 discussion draft for this very purpose. Pretty good support exists to have dialogue regarding, comment period closes on September 24, 2018.

Falling numbers - I know the unpopularity of this subject matter, but I must be prudent and advise accordingly. We've had an exhaustive discussion regarding falling numbers two years ago with the 2016 harvest; there have been no changes in what the insured is required to report - net bushels. Thankfully, the magnitude appears to be much smaller in scope with the 2018 harvest than what we experienced in 2016. If any grade or summary sheet identifies numbers below 300, we must use the chart below for 'net bushel' calculation. For reference, I've included the language from county actuarials (Special Provisions of Insurance):

Landlords - Anyone have a lease expiring or needing to 'wow' a landlord? Perhaps this next article is for you...

Markets - In the game of tic tac toe, three in a row was a win...we've had 3 straight weeks of higher closes than the week prior and positive steps in the correct direction. I anticipate the amount of SWW bushels coming in will pressure our prices near term. The worldly news on wheat production should continue to provide more support for stronger prices - Germany, France and Black Sea region all have downgraded production in the recent days. Below is a graph of wheat exchange from Paris (Matif) for Dec milling wheat reflecting the price climb.

The corn futures rally has provided strength to the ethanol market for it's strongest close in two months. USDA releases another monthly report this Friday, analysts are expecting USDA to reduce worldwide wheat yields and corresponding carryout...I'm holding my breath.

Update seminars - We're again planning to host an update seminar this fall, but make it more of a summit with additional features and speakers from agronomic to marketing to tax planning. Stayed tuned and we'll update as those details become finalized.

Weather - The drought map appears unchanged from the week prior, which isn't surprising given the heat that was present. 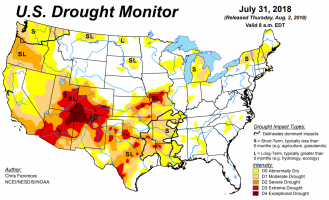 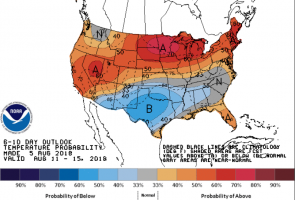